But would McEnroe have been a better player without the tantrums? The great man himself certainly thinks so.   He writes in his autobiography, ‘Serious’, that if he had had the ability to remain calm, he would have performed better.  Of course, one might say that with 7 Grand Slam titles to his name,  McEnroe was already performing to the top of his ability. But after his golden year of 1984 (42-match winning streak + victory at the US Open and Wimbledon), McEnroe never again won a singles Grand Slam.  Although he often played well in his later years on tour, he never made it past the semis in any of the Grand Slams, and had difficulty getting to grips with the high power games of younger tennis stars like Boris Becker.

McEnroe’s Temper – A Sign of Nerves and Fear of Losing

In fact, McEnroe is the first to admit that his temper often disrupted his rhythm, and was often an indication that he was about to choke.  He sees his anger as a response to nerves and a deep-seated fear of failure.  Unlike his rival Jimmy Connors, who diffused tension in matches by joking around, McEnroe expressed tension by losing his temper and lashing out.  In ‘Serious’, McEnroe displays great humility by apologising to all those who bore the brunt of his anger. Indeed, McEnroe reveals in his book that he often apologised to players and umpires after matches for his behaviour.

McEnroe’s book offers some intriguing insights into both his personal psychological make-up and tennis psychology more generally.  Beneath the tough exterior is a sensitive man, with ultra high standards instilled in him by his parents.  His drive to succeed is intense, as is his contempt for failure.  He describes his 1982 Wimbledon (reaching the final but losing to Jimmy Connors) as a ‘lousy’ tournament.  Hovering around 8 or 9 in the world rankings during the last 6 years of his career qualifies as ‘world class mediocrity’.  McEnroe judges himself so harshly that it’s hard not to feel sympathy for him.

It’s interesting to note that as a child, McEnroe would burst into tears whenever he lost, but never lost his temper.  Like Andre Agassi, McEnroe admits he never really enjoyed playing competitive tennis, finding the stress and loneliness of the sport hard to bear.  Every match was haunted by the fear of losing, especially at the height of his success when he was expected to win against all but the very best players.  Victory brought relief, rather than pleasure.

McEnroe had great natural ability and worked hard.  This translated into many years at the top of the game and 7 major singles titles.  He also spent more time engaging with the thought stream in his head than many other players, and I wonder if, ultimately, this prevented him from reaching his full potential.  His famous defeat by Lendl in the 1984 French Open final is a case in point, where a loss of mental composure cost McEnroe the title.

How many more Grand Slams might McEnroe have won had his mental game been stronger? Might he have been the Federer of his day if he had been able to disengage from his thinking and focus fully on playing each point? 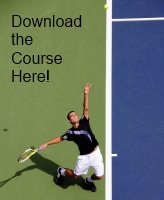